Studio Equipment - What do I need? 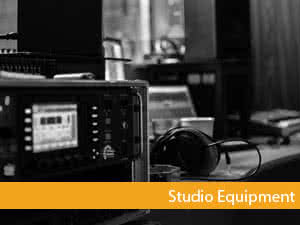 For aspiring artists who are interested in making music at home, there has never been a better time than today. The options are plentiful, and the prices are a fraction of what they were before:

A simple home studio can deliver the kind of results that would have been needed not so long ago in a professional studio.

But given the many opportunities that are currently available online or in a store, it can be difficult to know where to start. The good news is, there's no real answer. Nevertheless, we have limited things in conversation with a number of creative musicians from the entire musical spectrum in order to give price-conscious beginners a guide.

The inputs on the audio interface are the only way to get sounds into the computer.

And if you use monitor speakers instead of headphones, it acts as a link between the computer and the monitors. Finally, it is the audio interface that processes all the audio signals that enter and leave your computer through analog-to-digital and digital-to-analog converters.

Your computer already has audio converters built into it, but they are not designed for professional audio quality. And while virtually every stand-alone interface offers better converters than the computer's, the audio quality can also be scaled based on price.

Of all the choices you make when setting up a home studio, this could be the most difficult. Judging music will always be a subjective activity, and the same goes for judging how it sounds.

At the same time, however, there are some generalisations: you want speakers that sound neutral and don't want to colour or distort your productions excessively. For example, you should not amplify the bass, because this disturbs the ability to hear exactly what is actually going on in the low frequencies; the speakers on which you listen to music are not necessarily the speakers on which you want to make music.

However, probably everyone will have a slightly different idea of what neutral sounds sound like, and there are other factors that affect the music from your monitors, including the size and layout of your storage space. Your monitors are really only as good as your room and your ears.

Mouse, trackpad, keyboard - none of them is a particularly intuitive music tool. This means that you need some kind of controller - be it a piano keyboard or a pad - to control and control sounds in your DAW. Once again, the range of possibilities is astonishingly wide.

If you're looking for a knob to turn and something to play drums on, something like the Akai MPK Mini might be suitable. If you want more, choose something bigger, e. g. the large MPK-series from Akai or from Novation.

All of these controllers can be more or less seamlessly integrated into any DAW, but if you want to see a device as an image of the screen, try Native Instruments' machine or Ableton's Push.

The machine is a pad-based instrument that integrates with Native Instruments software instruments, samplers, and effects to enable fast, intuitive editing and performance techniques such as pattern editing, step sequencing, and sample slicing.

Push takes a similar approach with an extensive array of pads that mimics Ableton Live's clip view and a host of built-in, freely programmable controls that give you access to Live's key features.

The wide world of hardware instruments spans many decades of electronic synthesizers, drum machines, sequencers, effects - to name but a few, not to mention all the traditional sound generators such as guitars, drums and grand pianos.

But when it comes to electronic gadgets, despite the temptation of classics like the Roland TR-808 or Juno-106, their worldwide fame means that prices have exploded in recent years; many eBay sellers are asking nearly $4,000 for 808s in good condition. Fortunately, there is a robust market for modern replicas for users looking for the classic sound.

The Roland Boutique range, for example, is a series of miniature versions of the company's most legendary machines, and Korg has also made a lively effort to revive a number of old-fashioned, classic-safe machines.

For beginners who are interested in used equipment, start with the basic keyboards of older models from Roland, Yamaha, Casio or Korg.

The mixer is the control centre in the home recording studio and should be deliberately selected, as many consoles have an integrated audio interface for recording and connecting to your computer. We have a wide range of USB, Firewire and digital mixing consoles to record your live performances and studio productions. You should be aware of all the channels needed and the effects section.

The EQs on your mixer will help you reduce and amplify the frequencies by creating a clean, loud signal. Smaller mixing consoles with up to 4-6 channels are suitable for solo musicians with XLR and jack inputs for instruments with stereo backing tracks and keyboards. Effect mixers have reverb, delay, chorus and many other effects that add the finishing touch to your live mix. For larger installations and professional touring musicians, mixing consoles with up to 32 channels are available.