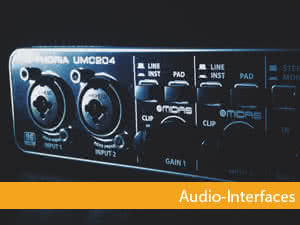 Audio interfaces are indispensable when it comes to making music on your laptop, PC or other mobile devices, as they record and play the sound. Choosing the right sound card determines whether the recording sounds professional or whether it is more or less average. The audio interface is the hub of the modern recording studio.

From modest home studios to massive media production houses, audio interfaces are vital for bringing audio signals from the outside world to your computer and back. For many artists and engineers, the audio interface is the most important piece of hardware that provides microphone preamplifiers, direct instrument inputs, digital converters, dosage, headphone distribution, and even digital signal processing (DSP), all in one unit. In more demanding setups, high channel count audio interfaces completely replace the role of traditional recording consoles.

The sound card market is large and each type has its own advantages and disadvantages. On this page you will find an overview of which sound card is best for you.

Depending on whether you are a PC or Mac user, the choice of interface is already made at the base. The MAC offers different standards than the PC. Here is an overview of all common connection types for audio interfaces.

USB 2.0 is still standard - especially for small interfaces - but nowadays USB 3.0 interfaces are also available, which are up to 10x faster and therefore can process more signals at the same time and work latency-free.

Firewire audio interfaces work differently than USB interfaces. They work faster, preventing delays in music recording or playback. Most laptops and PCs do not have a Firewire interface, so you need to upgrade your hardware before buying. The situation is different with the MAC. FireWire is the standard here and can be operated immediately without retrofitting. The speed advantage over USB2 is not noticeable in practice.

There are two types of FireWire audio interfaces: the older FireWire 400, which has about the same speed as USB 2.0 and FireWire 800, which is almost twice as fast. FireWire has been the standard for high-speed audio interfaces for years and was found almost exclusively on Mac computers.

Most modern computers connect to Thunderbolt adapters with FireWire audio interfaces via FireWire. FireWire provides ample performance for most studio needs. They also have the advantage of being very affordable with a high availability of channels. 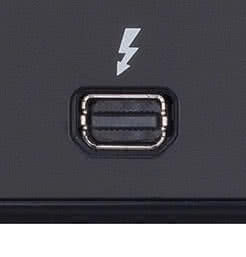 Thunderbolt Audio Interfaces are the best and most professional - faster than USB and Firewire interfaces. With their high data transfer speed and thus even less likely to cause delays in the process, they are unfortunately also among the most expensive. If you are currently setting up your own small studio, we recommend to wait and see, because most of the time professionals work with Thunderbolt interfaces.

Thunderbolt interfaces offer connectivity speeds twice as fast as USB 3.0 and over 12 times faster than FireWire 800, while Thunderbolt ports are universally available on modern Macs, they are uncommon on Windows PCs and many popular Thunderbolt audio interfaces do not support the Windows operating system.

Music is made on even the smallest devices. Audio interfaces are also available for recording on mobile devices such as the iPad or iPhone. This allows you to record on the go at a low price. 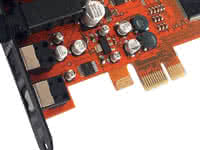 PCI audio interfaces are part of the old standard and are not so popular anymore, because you have to install an additional PCI card in the PC. Some of them have analog inputs, but some don't, so for the microphones a breakout box and a preamplifier are needed. However, the latency and speed of PCI interfaces is still good and even older interfaces are still working very well today.

The agony of choice

When choosing the right interface, some things have to be considered. In the run-up, you can think about whether and how many of the following features are needed:

For the simple home recording studio, an interface with 1-2 outputs and 1-2 inputs is sufficient. Most of the time, XLR inputs with combined 6.3 jack inputs for microphones are directly integrated into the common USB interfaces. The phantom power supply can usually be selected via a toggle switch. Sound cards up to 150 € should be enough to connect his speakers, a microphone, headphones and eventually a turntable.

In the professional sector, more inputs or better converters are usually required. RME interfaces in particular are to be found with FireWire technology and numerous entrances in professional studios all over the world.

Latency: Indicates the delay with which a signal arrives. If, for example, a key is pressed on the midi keyboard, it is not output immediately, but must first be processed by the sound card and can then be played back. The latency can be adjusted in the sound card and is also dependent on the driver

ASIO: Asio drivers have become an integral part of modern music production. For low latency, properly programmed Asio drivers are required, which are provided by the manufacturer. Here, the wheat is separated from the chaff, because not every manufacturer is able to program stable drivers equally well on all systems. A solution to this problem is provided by universal ASIO drivers such as ASIO4ALL, which can be used on any card.

OPTICAL: This is a digital output of the sound card based on fiber optic cables. These usually sound better than the analog equivalent.

RCA: Can be an output - or input by means of a chinch connector. It is found e. g. in turntables.

3.5 Jack: Mostly the headphone output. With better interfaces often also available as a 6.3 jack. A 3.5 jack is the "smaller jack plug", as it can be found in almost all consumer products such as mobile phones, for example.

6.3 jack: This is either a headphone output or an input for microphones or guitars. Also often referred to as instrument input. Almost twice as thick as the 3.5 mm jack, it is used in the professional audio sector. Often the jack input is also fused with the XLR input as a combination input. This means that you can operate either XLR or jack in one and the same socket.