Here you find the DJ-equipment of the 21. Century with MP3 & Co. - most modern software and MIDI-Controller as well as digital players and the necessary accessories. As well you'll find turntable software such as Traktor Scratch, Rane Serato up to Allen & Heath Xone DX!especially for your own digital mix.

Here you find the DJ-equipment of the 21. Century with MP3 & Co. - most modern software and MIDI-Controller as well as digital players and the necessary accessories. As well you'll find... read more »
Close window
Digital DJ Equipment

Here you find the DJ-equipment of the 21. Century with MP3 & Co. - most modern software and MIDI-Controller as well as digital players and the necessary accessories. As well you'll find turntable software such as Traktor Scratch, Rane Serato up to Allen & Heath Xone DX!especially for your own digital mix.

Digital DJ Equipment and Accessories in the 21st Century 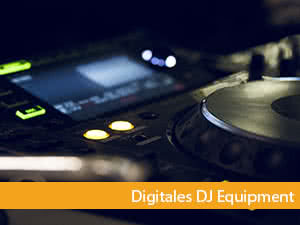 DJing without record crates - that was unthinkable until a few years ago. Today, however, laptops, Internet access or digital controllers can replace the turntable. The digital revolution is making itself felt. For DJs, digital DJing has many advantages compared to the analogue version. However, according to opponents, there are also serious disadvantages associated with the renunciation of turntables. Let's leave the church in the village or the record in the turntable: Whoever demonizes digital deejaying from the outset is a bit like grandpa, who thinks the internet is a nuclear weapon and rejects it out of pure ignorance. High time for a fair view of the analogue and digital versions.

With Final Scratch for digital deejaying -' from scratch

At the turn of the millennium, Hawtin and Aquaviva impressed the music scene with a box between the analog equipment and the laptop. This first digital vinyl system was based on a hardware box from Final Scratch and brought the sounds out of the laptop to transfer them onto specially designed time code vinyl, making the signal palpable for record needles in an analog way. The advantages of vinyl are retained in the mix, while fresh music can be played back on the laptop. The record hauling had come to an end:' From scratch' (from nowhere) paved the way for digital deejaying through the Final Scratch System.

How Digital Vinyl Digitized the DJs

Why do the digital signals from a laptop actually transport back to analogue turntables when the whole thing works theoretically without the detour via Final Scratch or successors like Traktor Scratch and Rane Serato? Manufacturers answered this question a few years after the turn of the millennium with a new concept: the DJ controller. One of the first controllers with full functionality was the Vestax VCI-100, which is still considered to be a robust and popular device today. In the following years, controller variants with or without sound card will be developed, which can be operated with or without line inputs and are specially prepared for software variants such as Traktor or Serato Itch. External audio interfaces are available just as quickly as integrated sound cards. Equipped with a controller and interface, digital DJs can now switch to free channels on the mixing console, or use a controller with externally connected sources to replace the mixing console.

In particular, manufacturers such as American Audio, Native Instruments and Reloop are quickly leading the way in the controller market and are taking the step towards completely digital deejaying with their products. Initially, the software on the laptop is controlled by a controller and MIDI command. Until there are devices that can be used not only as MIDI controllers, but also as stand-alone devices. Thanks to integrated displays for hard disk navigation, many controllers can now do without a laptop. In the 21st century, completely digitized DJs have long since become widespread reality.

Poor sound due to bad sound

Digital music is not music, so to say confirmed fans of the turntable. The tones of vinyl records score well against digital sources such as CD and MP3 due to their analog signal. Analogue audio signals have stepless curves, while digital signals form curves with approximate stairs. The sound losses can still be kept within limits with digital signals. How noticeably the sound loses its fullness depends mainly on the sampling rate. By the way, the revolutions play a major role for good sound. 7" and 12" singles have a high cutting and playback speed of 45 revolutions per minute. Because of the high dynamic range, they almost sound like a master tape.

The Truth About Digital Creativity

In addition to poorer sound quality, the digital version of deejaying is accused by many critics of being something that anyone can operate. With analogue deejaying, mixtapes were mixed with real records and with great effort on turntables and mixers. The quality of a mix at that time depended largely on the person behind the equipment. Disco-jockey could only become a disco jockey if you knew his craft. The digital revolution is making the work of DJs increasingly easier: software programs are now taking over the art of clocking. However, those who denigrate digital deejaying as uncreative, forego the professional optimization possibilities of their own art. Away from the mass market, the digital equipment market offers serious solutions without vinyl pressing, which do not compromise on quality. Digital DJing also preserves creativity: it's just another.

The right technology for DJs - the consequences of the digital revolution 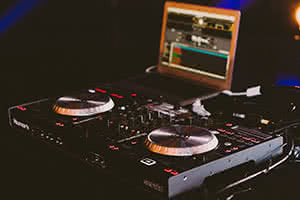 The digital revolution is changing the technology and equipment of DJs. Even before the digital revolution, the right accessories played a role in the quality of a DJ. In the current age, however, it is more important than ever that the equipment is right. With inferior equipment, modern DJs have taken their creativity.

Deejaying with a lasting effect

Whether USB turntables or direct drive: turntables and turntables accessories such as slipmats and pick-ups are self-explanatory the basic rock when it comes to DJ equipment. But because times are changing, primeval rock is no longer satisfying everyone. DJ accessories now include numerous effect devices: from studio effect devices to guitar kickers, everything is included. Contemporary is no longer necessarily played with two turntables and vinyl: the CD no longer takes credibility away from the modern Deejay. DJ CD players with USB or SD are nowadays just as important accessories as the turntable. Today, Club Standard's products are mainly used in Pioneer DJ players such as the flagship CDJ-3000.

The right mix is all about controllers

In addition to Pioneer and Native Instruments, contemporary accessories for DJs come from quality brands such as Allen & Heath, Denon Reloop, Numark, Gemini, UDG, Zomo and Vestax, Stanton, etc. Only one thing remains unaffected by time and technology: the demand for the right mix. Mixers ranging from 2-channel battle mixers to 3-channel mixers, club mixers and USB mixers are still at the heart of DJs today. Since the sound artists nowadays use DJ controllers for DJing, midi controllers for controlling Serato, Traktor and VirtualDJ round off the modern DJ accessories.