Strobe Lights for Clubs and Events 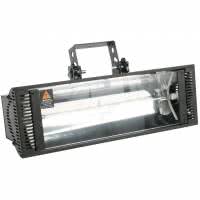 A stroboscope, also known as a strobe, is a spotlight that generates regular flashes of light. They are available in different sizes and power classes. The frequency of the generated flashes is variable over the range from about 1 Hz to about 12 Hz. This means that a flash of light is generated 1 to 12 times per second. Especially in discotheques stroboscopes create interesting effects on the dance floor. From the application in the party cellar to professional stage shows: a stroboscope is part of the basic equipment.

In an otherwise dark room, strobo light has the effect that movements appear choppy. The flashes allow us to perceive an image only a few times per second. We do not see a fluid movement, but a sequence of still images. This creates the impression that movements happen in slow motion. Fast-rotating objects, such as fans, can even give the impression that they are standing still. The stroboscope effect works best when there is not too much competition from other light sources. Only then can the "slow-motion" effect develop its full effect. But this is not the only possible application! You can also use a strobo to create a "flash" with single flashes that perfectly supports the music.

Together with music this effect is very well suited to generate impressive rhythmic experiences. But the strobe effect can also be used as a component of a lighting mood on stage.

How is the flash generated?

Very classical stroboscopes have a xenon discharge lamp that can produce very bright flashes. The newer LED stroboscope is often a normal spotlight with additional strobe effect. In head moving systems with discharge lamp a stroboscope effect is created by fast shutter movements.

Stroboscopes with 1/10 V control can be influenced in their frequency by a rotary control. Often they also have jack inputs to connect a controller. But if you want to integrate the effect precisely into your light show and control it via a lighting console, you need a DMX connection.

Sometimes a stroboscopic effect can trigger a seizure in photosensitive epileptics. At frequencies above 12 Hz the risk can increase. Most commercially available stroboscopes only flash in the range of 1-12 Hz. At events where the visitor does not necessarily expect strong light effects, it may be appropriate to place a warning sign at the entrance.