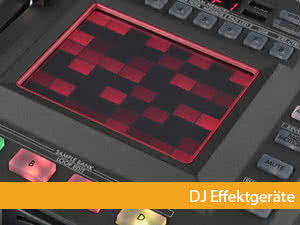 Mixing records and CDs, is no longer enough for modern DJs. Software such as Ableton Live, Traktor DJ and Serato Scratch Live open up a new spectrum of possibilities. In the electronic area of DJing, live gigs overlap with actual DJing. The performance depends on the controller, which has to access the software as intuitively as possible. DJ effect devices reproduce songs in an even more individual way. Timing effects influence the sound character in individual passages without interrupting the musical flow.

Modern effect devices are not only equipped with kill switches for abruptly lowering treble, bass or mids, but also go far beyond individual playbacks. Single effect devices for a single effect such as reverb are juxtaposed with multi-effect devices that combine effects such as distortion, phraser, delay, grainshift and flanger. There are as many effect parameters as there are different effects. The standard parameters of most effect devices include bypass for unprocessed signal forwarding and FX-deepth/mix for controlling the ratio between direct and effect signals, as well as time parameters for entering quarter note lengths to the nearest millisecond.

There are several designs of the effect unit. All of them have their advantages. The most important designs include

Many Pioneer effect devices are equipped with sample players or synthesizer presets, so that there is a smooth transition to making music. Effects can be mixed or looped in with effect devices. The device picks up the effects from the mixer's effect send and adds them to the overall signal in a dosed form. Reverb, delay and echo are in-mix effects. For loop-in/insert effects, the effect unit is in the signal path of the direct signal. Compressors, gates, limiters and other dynamics belong to this effect type as well as expanders, EQs, pitch shifter, loop, filter and transform effects.

There are various options for integrating effect devices into a DJ setup.

Whether effect device, controller, CD player or software: Recordcase knows what modern deejays need. Consulting is a matter of honour for us. Therefore, simply make a stop at our place, contact us and use high-quality DJ accessories to make an even better impression in the future.