What is a Groovebox? 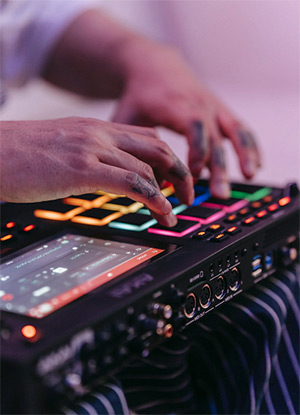 Simply put, a groovebox was originally designed as an all-in-one device. A small box, with an integrated sequencer and sounds, that was quick and relatively easy to use and fun to play. The concept was first introduced by the manufacturer Roland in 1996 with the first groovebox: The Roland MC303.

The concept worked and quickly found a lot of interest. In the following years all manufacturers brought their more or less successful ideas of a groovebox to the market and a real wave flooded the market. No matter if from EMU, Yamaha, Roland or Korg. Each device had its pros and cons, but they all had something in common: they brought fast and sonically decent music fun.

Spurred on by the success Korg has achieved with his MC series, every manufacturer who was a big name in the industry was now producing grooveboxes - and everyone was trying to outdo the competition with new ideas and features.

and many more points found their way into the different boxes. Every manufacturer often had a "special" feature that was not found in any other groovebox and so you had to adapt to a model and deal with its advantages and disadvantages.

The well-known E-Mu Command Station, for example, makes a sampler urgently miss, but can score with 128 voices and sophisticated synthesis functions and many expansion slots.

A Roland MC-909 had a large display, a sampler and a good sequencer - unfortunately only one expansion card could be plugged in for new sounds.

The Yamaha RS-7000 had a sampler and good factory sounds, but no velocity-sensitive pads or expansion slots. It led a niche existence, although the groovebox was one of the best equipped.

Perhaps the somewhat more complicated operating concept and the high price did not convince everyone.

But these were all known shortcomings and if anything, whining on a high level. Groovy music could be elicited from all these boxes, and so in the end it wasn't the above-mentioned shortcomings that put an end to the "classic" grooveboxes, but simply the time-dated sounds, lack of effect and processing power. The possibilities at the computer had simply become better, faster, easier and cheaper 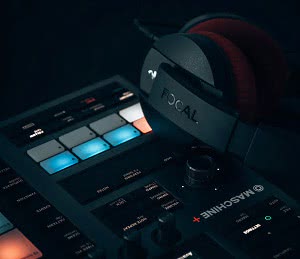 After the turn of the millennium and with the increasing potency of CPUs, the hardware in both large and small studios was increasingly replaced by software. Or mostly a combination of hardware, which should be seamlessly integrated into the software.

As a result, the demand for grooveboxes as pure hardware solutions has also declined and manufacturers have either withdrawn or launched hybrids that fuse hardware and software. The power was taken over by the computer, but the feeling of hardware was still guaranteed by the use of a dedicated, perfectly tuned midi controller. Best example: The Native Instruments Machine.

This machine has successfully combined both sides into a round package and is still very successful in 2022.

But there is also a manufacturer who still offers "real" standalone grooveboxes: Korg with its electribe series.

These boxes have been built in the same way for almost 2 decades and only improved in details and still offer the real feeling of a groovebox. But even under the hood, the comfort has been raised into the new decade. SD cards have been introduced and instead of recording several outputs in analog mode, they are now exported directly to Ableton.

What should a good groovebox be capable of?

The days of cutting corners are over thanks to increased CPU power and cheaper components. The following things should be included in a well-equipped groovebox:

Which groovebox is the right one for me?

That depends on the use and preferences. If you are looking for a groovebox with your own sounds for fast sequencing fun, you should go for the Korg electribe series.

These have always been available in 2 different versions. The "normal" version is designed as a synthesizer and is called "electribe 2", a short "S" behind the name stands for the sampler version. Basically the same machine, but samples can be loaded into the device at will.

Roland is really serious with his new Groovebox series. With the Roland MC-101 and the MC-707, the manufacturer has again brought a classic groovebox to the market in 2019, which works completely standalone.

On 4 or 8 tracks you can put together tracks to your heart's content. Everything you need is on board: samplers, good sounding effects and more than 3000! Sounds from Roland's legendary sound pool.

If you don't have a problem with not working standalone, either the Native Instruments machine or Ableton Push is a good choice.

Both are complex controllers that work well in their DAW environment and allow you to produce music on a professional level.

A somewhat special device is the OP-Z from Teenage Engineering. This little mini box is a full-fledged workstation in a really small pocket size with several integrated synthesis forms and a sampler. This device is ideal for mobile sketches or even complete pre-productions. Unfortunately the manufacturer can hardly keep up with the production. In any case an extremely interesting and intuitive machine.

With each of these solutions complete beats and songs can be created on a professional level. It always just depends on which creative head is sitting in front of the machine. Maybe you?