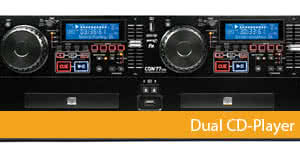 In addition to speakers, mixer and headphones, there is also a DJ equipment: the double CD player. As with any technical device, it must be weighed before purchase whether the device is to be used only for private use or for professional purposes. The equipment variants of the players are manifold.

It should also be possible to play an MP3 CD in addition to the normal audio CD in the player. Many songs can be stored on an MP3 CD and played during performances. The player also makes navigation and track searches easier by displaying information about tags and folders.

The player should also have anti-shock equipment. This function is especially important to avoid jumps when playing the music with any kind of vibrations. As soon as the speakers are started up to the maximum, the resulting sound can cause possible vibrations and jumps.

To connect a USB stick or an external hard drive to the player, it should have a USB port integrated. If songs are missing in the record collection, the USB port can also be used to connect your own smartphone and play the missing songs. Thus, every music wish can be considered.

Which additional effects and functions are still useful for the player is ultimately determined by personal taste. With a well-equipped player, it is also possible to add staccato or digital effects during playback, for example. These functions are rather negligible in private use.

The various technical features of a player have evolved enormously in recent years. Compared to the past, the new players have not become much more expensive. Today, it is possible to purchase well-equipped players at reasonable prices. Surely there are price differences between players for private use and professional use. Therefore, it is particularly important to consider in advance for which areas the player should be used.

These devices are also a sensible investment for bars or clubs. Most of the devices offer an automix function, so that the player can usually only run alone with little supervision.