What is a Midi Controller? 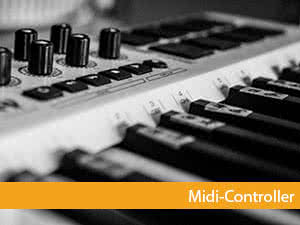 MIDI, short for Music Instrument Digital Interface, is a protocol that allows instruments such as synthesizers and drum machines to communicate with each other, as well as with other devices such as computers and effect processors.

A MIDI controller is a device that can send commands to a MIDI device. MIDI is a wide-ranging protocol: it can be used to trigger (play) notes on a keyboard workstation by turning functions on and off in a computer program, changing presets on a multi-effect processor, and countless other applications.

For this reason, there is a wide range of MIDI controllers. While the shape and layout of a MIDI controller is dictated by its intended use, they all have one thing in common: they are all able to interact with any MIDI device.

MIDI controllers do not produce their own sound - they are used as input devices for other instruments. Some of the most common controller types are piano keyboard controllers such as the M-Audio Keystation. These are used to control synthesizers, sound modules, software instruments and other MIDI-equipped instruments.

Also popular are pad controllers, such as the Akai Professional MPD series, which have a number of keys instead of piano keys. These are often used to control percussion instruments such as drum machines, but can still be used to play synthesizers and other keyboard style instruments.

Also for other applications

Because it's easy to communicate with MIDI for different devices, there's a wide range of MIDI controllers for applications other than music. Some are quite simple, such as the Tech 21 MIDI Mouse: It's a small three-button box that you can use to switch between presets on a MIDI-equipped effects processor or guitar amplifiers.

The other extreme is multi-purpose controllers for various DAWs, such as the Native Instruments machine. These controllers have many buttons, buttons and faders and are designed to control many different functions in computer software simultaneously. For example, you can start recording, switch through presets and play passages without touching the computer's mouse.