In the beginning there were two friends, Frédéric Brun and Gilles Pommereuil, both students of INPG, Grenoble Institute of Technology - France. Both were members of the university orchestra. Frédéric played the violin and Gilles conducted. Since.... always...... the way people made music. However, this trend accelerated in the 1960s. In the late 1990s it was clear that it did not stop.

Frédéric and Gilles, both engineers, shared this vision that technology could make music creation accessible to everyone. Their first product, Storm, was a virtual all-in-one studio that made it easy for anyone to create music for little money.

Arturia began reconstructing legendary analog synthesizers in digital format in 2003. Their first software synthesizer, the Modular V, was highly praised by critics and became a great success. In the following years, several other software instruments were introduced to the market, giving many musicians access to legendary sounds and creative possibilities that they could only dream of.

Arturia software synthesizers are based on TAE® (True Analog Emulation), an advanced proprietary technology that enables accurate modeling of analog circuitry behavior on PCs. This technology was developed by Arturia's in-house signal processing team and has been successfully used to reproduce the sounds of many classic analog synthesizers. It is constantly evolving and becoming more precise year after year.

In 2009, Arturia introduced Origin, a very ambitious hardware synthesizer. Origin was called "the Frankensynth","the holy grail of all synthesizers","the most advanced synthesizer of all time"..... since it offers a large collection of modules from past and present, which you can mix to your own synthesizer patch.

In the following years, Arturia was one of the first in its industry to see the potential for integrating native software and dedicated hardware.

With the release of Analog Experience the Factory, Spark Creative Drum Machine, Keylabs and MiniLab, this trend to offer musicians the best of the software and hardware world was encouraged. Here too, it was important to offer every musician a great experience at a reasonable price and with very little complexity.

The story continues. But the readings remain. Arturia likes to create great products, instruments that inspire and stimulate the creative workflow. Arturia provides these at a fair price to ensure that everyone can create and make music. Because everyone has a right to music.

Arturia Keylab 49 Essential
With everything you need to express your musical ideas, take command of your studio, and perform like you’ve always dreamed, KeyLab Essential is an intuitive, powerful, carefully crafted controller keyboard that’s easy to master. It’s...
€184.00 €199.00 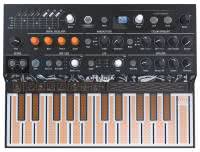 (3)
Arturia Keylab 61 Essential
Music is at the heart of this controller. Every aspect of KeyLab Essential has been carefully chosen to give you the best possible experience when creating and performing. From the responsive keyboard to the intelligently assigned knobs...
€245.00 €249.00

(3)
Arturia BeatStep PRO
BeatStep Pro is unlike anything you have ever used on stage or in the studio. Wherever you are, whatever gear is available, taking control of the creative process has never been so easy. With BeatStep Pro you are master of the...
From €220.00 €259.00

(2)
Arturia MatrixBrute
MatrixBrute is an outstanding analog synthesizer. Offering three Brute oscillators, a Steiner-Parker filter and a ladder filter, five analog effects, and the incredible modulation matrix. It is a massive sonic beast. The matrix can also...
€1,799.00 €2,299.00

Arturia BeatStep
Arturia’s BeatStep: a degree of functionality and performance never seen before in a portable pad controller. BeatStep is highly versatile, capable of triggering clips in applications like Ableton Live, playing drums with BFD or...
€82.00 €99.00

(1)
Arturia MicroBrute
The MicroBrute was designed to be small but still retain an amazing sound quality. With a 100% pure analog voice path and advanced interconnectability via MIDI, USB, CV/ GATE, this machine is a true powerhouse synthesizer that takes your...
€279.00 €349.00

Arturia KeyLab Essential 88
Let your creativity run wild with KeyLab Essential 88 from Arturia, a MIDI controller with enough features to serve as the command center for your digital production environment. Featuring a host of knobs, faders and pads for interacting...
€344.00 €389.00