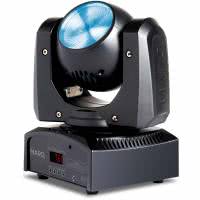 No great light show without moving headlights. The moving headlights have countless effects and can be programmed to the millimetre. These technical all-rounders are not only used for large stage shows, but are also enjoying great popularity in more and more small clubs and discos.

Moving-head generators are not only used at concerts, stage shows, musicals and in discotheques, but also in TV productions and theatre performances. The technology was first used at a concert in 1981 and subsequently made a remarkable breakthrough.

The moving headlights combine almost all common lighting effects in one machine. Stepless movements are possible as well as the mixing of different colours. LED moving lights have CMY or RGB colour mixing. This means that the colours can be created completely individually. So-called gobos, exchangeable metal plates, allow for different patterns, depending on your wishes. Moving heads can be controlled in series in master/slave mode - without programming. Or, especially popular with club owners, in the Sound to Light mode. An integrated microphone provides for suitable movements and colour changes according to sound.

The big brother of the scanner

A moving head is very similar to a scanner. However, as the name suggests, only the head with the lamp moves. With scanners, the light is deflected by a moving mirror. Compared to scanners, moving head machines have no loss of light and have a much larger and wider radius of action.

Wash Moving Headlights have a rather wide beam angle and allow the illumination of large areas. Meanwhile there are also combinations of Wash and Spot Moving Heads. The beam angle of the Hybrid Moving Heads can then be adjusted as desired.

Beam moving headlights have a beam angle of about three to five degrees and are often used as "accent lighting". Hybrid solutions are also available here.

The moving headlights are available in different price categories and generally the alternators are not cheap. However, the investment is worthwhile. Thanks to the latest LED technology, moving headlights are particularly energy-efficient despite bright and saturated colours. In addition, they combine almost all lighting effects and make the one or other purchase unnecessary.

Which Moving Headlight suits me?

Depending on requirements, wishes and areas of application, there is the right type of moving headlight for everyone. Discotheque operators and DJs rather rely on the spot function. A Led Moving Head, which is not particularly heavy and large, is therefore gladly used. Event technicians often need rather large moving heads that can cover a large area.