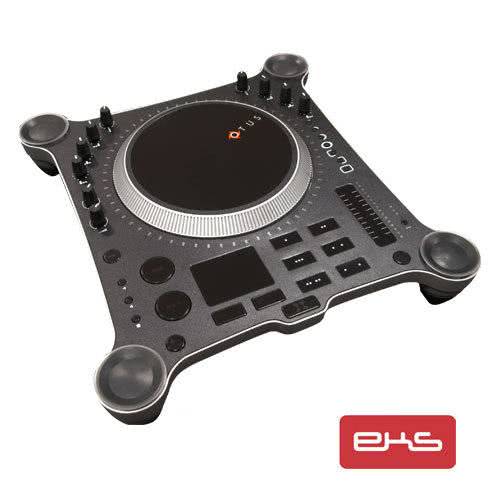 EKS Otus’ stylish physical appearance, clever design and the solid touch and feel will make any professional DJ feel at home from the very fist encounter. The sturdy aluminum frame is built to withstand the physical abuse of DJ’ing and the hazards of travel.

The heart of Otus is its illuminated, high resolution 7.5” jog wheel with sensitivity adjustments. Otus has been designed to fit firmly in the place, or on top of standard DJ turntables, with vibrations substantially reduced due to its unique sharp cloves (feet).

All of the controls onboard the Otus are of the highest professional standards and are illuminated by LED indicators for maximum usability in a club environment.

Independent by spirit, Otus gives DJs the freedom to work with software combinations of choice. It feels at home next to a mixer, external soundcard or another controller, but can also replace them all if needed. The advanced MIDI mapper & Asio software makes creating different setups a breeze.

Otus is also customizable to suit individual preferences or mood. The smoked glass surface along with the feet of the controller can be switched making Otus a truly personal instrument.

Otus offers a wide range of controls enabling the user full control – no mouse or keyboard needed. The placement of each control has been optimized for usability and for show factor. All of the key functions are placed closest to the DJ, while effect orientated controls are placed further away. This allows the club audience a better view of the DJ tweaking knobs.

To top it off, all of the controls can be virtually doubled via a color indicated layer selection switch or shift button. The second layer, indicated by LED color changes, offers the option to control two virtual decks with one Otus or even other software like MIDI controllable VJ programs.

A professional level audio/headphone output allows direct connectivity to a DJ system or the possibility for headphone preview.

To meet the needs of professional artists, all the controls are of the absolute best quality. The placement of each control has been optimized for usability and for show factor. All of the key functions are placed closest to the DJ, while effect orientated controls are placed further away. Otus is also designed to fit on top of a standard vinyl turntable. This makes it easy to fit it in any DJ booth. Otus weights 2kg, so it's firm and sturdy but still retains its portable nature

10 control knobs, 17 low travel buttons and 6 touch sensitive buttons - all controls freely assignable to suit the artists' personal needs. No mouse or keyboard is needed to perform. The controls are specially designed to meet the needs of the present digital world as well as the challenges of the future. [Vid

The heart of Otus is its illuminated, high resolution 7.5” jog wheel with both physical and virtual sensitivity adjustments. The touch sensitive top part of the wheel functions like a vinyl turntable, allowing you to scratch or cue the track by rotating the wheel. The outer rim of the wheel functions as a pitch bender. The LED illumination around the wheel enables two way communication with MIDI software in a configurable manner.

Otus features two layers of controls, which can be easily swapped by pressing the switch button. This enables operating two virtual decks with just one controller. Layer changes are indicated by the change of the LED colour.

The 80mm touch sensitive relative pitch slider with LED visualization enables highly accurate pitch adjustments. The amount of pitch is altered by sliding a finger on the slider, and the accuracy of the slider can be chosen on the fly by pressing the scale button, for example 1x/5x/10x. The LED indicates the pitch value, which is recalled as the user swaps the virtual deck.

Each corner of Otus features an assignable jog wheel controller with an integrated select button in the middle - created for optimal file browsing or selecting effects and other features.

All controls are backlit by colour changing LED's for easy utilization in a club environment and other poorly illuminated situations.