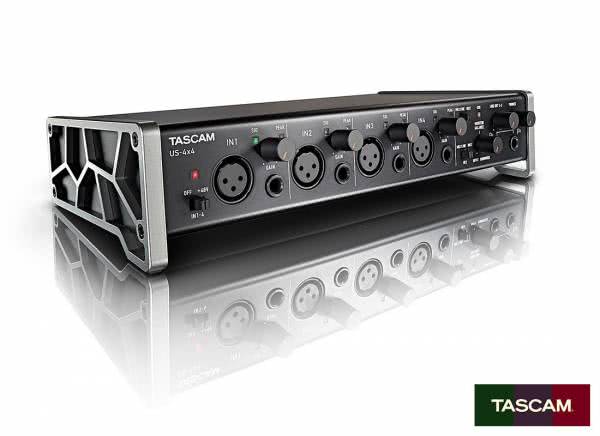 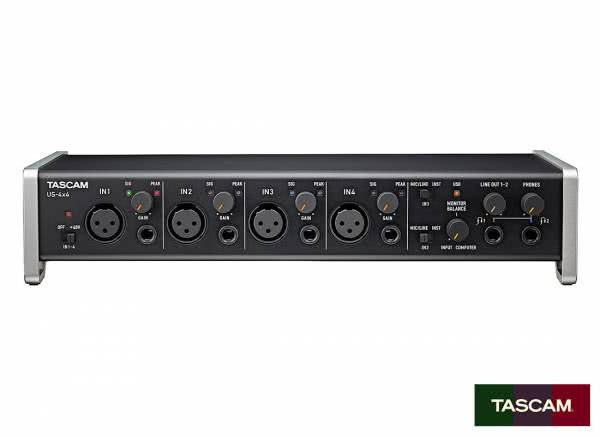 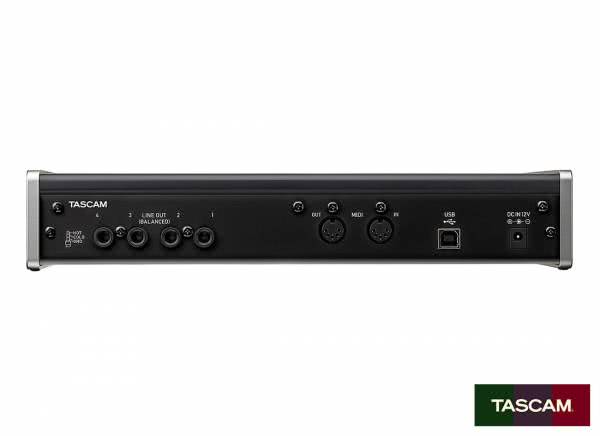 As a 4-input/4-output USB audio/MIDI interface, the US-4x4 is perfect for music creation – and novice users in particular. It offers serious recording capabilities with 96 kHz/24-bit quality with easy-to-understand operation so users can make high-quality recordings as soon as the interface is connected.

Mic preamps are the key to audio quality, and the Ultra-HDDA mic preamps in the US-4x4 boasts –125 dBu EIN rating which means a very, very low noise floor. Because of the wide dynamic range, this interface can also be used with dynamic microphones in addition to condenser mics. This makes it ideal for a variety of applications from recording vocals, pianos and acoustic guitars.

The radical eye-catching angled design was crafted by a German designer, who has worked on numerous well-known devices used for music creation, and is optimized for ease of use on the desktop.

The newly designed driver software is easy to install, and easy to master by anyone. Operation has been tested with major DAW applications, so the user can choose their favourite DAW without concern. The US-4x4 can also be used as audio interface with iPads and other popular iOS devices by simply utilizing a genuine Apple Lightning-to-USB camera adapter (an AC adapter for use with iOS devices is already included as standard).

With the potential for future use with other DAWs and iOS devices, four microphone preamps for multi-mic setups and four configurable balanced outputs, the US-4x4 is the ideal choice for the novice user requiring more than two audio channels.

Our original Ultra-HDDA mic preamps allow you to input high-quality audio from any audio source just by turning a knob. These are the same mic preamps that are in our HS-P82 professional recorders, which are popular in the broadcast and film industry. These versatile preamps can handle both condenser and dynamic mics, and will allow you to enjoy high-quality recording even if you are not an expert. These versatile preamps also feature line-level inputs for keyboards and other equipment.

One issue when recording using a computer is latency, which is when audio signals are delayed through digital circuitry. Another is setting up the driver software that is used when connecting an audio interface to a computer. In order to eliminate these problems, we developed new driver software and a low-latency driver that is easy to install. Furthermore, by making the external structure of these interfaces as simple as possible, the Tascam US-4x4 and US-4x4 allow users who are not expert users of audio equipment to operate them without concern.

We have applied the engineering expertise from years of making audio interfaces to create products that are both pioneering and practical. With its distinctive style, this interface will fit perfectly on the desktops of musicians and will stimulate creativity.

You will not need another audio interface if you decide you want to make music using an iPad or other iOS device. The performance of these interfaces has been tested with not only the bundled digital audio workstations (DAW), but also with other popular recording software – you can continue to use them even if you change DAW software. Since these units include MIDI inputs and outputs, they can also be used as MIDI interfaces.

The US-4x4 has four Ultra-HDDA mic preamps. Since up to four condenser mics can be used at the same time, this interface is perfect for multi-mic recording of vocals and instruments simultaneously. The US-4x4 features four TRS jack outputs, so the individual inputs can be output in parallel with the stereo output – often done for live performances. The US-4x4 includes an AC adapter as a standard accessory - recommended if the US-4x4 will be connected to an iOS device. TIP: By using an audio interface to output the sound from a commercial synthesizer app, a richer sound can be achieved.

Software licenses for Sonar X3 LE and Ableton Live 9 Lite are bundled with these interfaces - you can start making music from the day of purchase using these two DAW applications. These applications can also be upgraded to more advanced versions if desired.