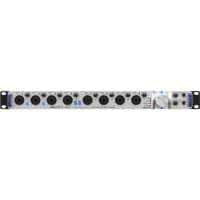 Our data turnover in the digital world has increased enormously and is growing day by day. This calls for modern interfaces that have to keep pace.
We live in a jungle of data interfaces, many of which justify their existence. But you can quickly lose track in this large field. In audio engineering it is always an advantage to take a closer look at the most important interface, the ear and the loudspeaker.

Developed by Intel in collaboration with Apple in 2011, Thunderbolt is the most advanced protocol of its kind to date. Its speed and compatibility make it unique. It's no coincidence that it's set to become the fastest external interface for consumers in the near future.

The different versions of Thunderbolt

Thunderbolt offers data transfer up to 10Gb/s and uses the native PCIe protocol for data and DisplayPort for video. This favors bi-directional data transfer on two separate channels, with full bandwidth. Reading and writing simultaneously is no problem compared to USB 2.0.
Its multi-protocol capability allows FireWire, USB, Ethernet and other protocols to be adapted.
Thunderbolt version 2 is compatible with version 1 and has an increased data rate of up to 20 Gb/s. The current Thunderbolt version 3 brings it up to 40 Gb/s and is designed as USB Type-C connector. To our delight, this will standardize all connector types in the near future.

Advantages for musicians and audio files

For us sound creators, a Thunderbolt sound card is all about the speed of the data. If you look at the connector alone in terms of sound quality, it doesn't matter if you use a USB or Thunderbolt interface. Differences in sound quality between different manufacturers of sound converters are also marginal.
The decisive point is the speed of the sound input and output. Less latency leads to better sound and Thunderbolt delivers this to you like internal PCIe cards, almost latency-free.

With USB or FireWire the additional buffering degrades the CPU. With Thunderbolt this does not exist due to the protocol used.
A full ten watts of power can flow. In opposition, USB only supplies 2.5 watts. This higher possible data flow allows you a larger frequency response, i.e. better sound.
This has a positive effect especially for you as a mobile user on the laptop. With a Thunderbolt audio interface you get the power of a desktop computer on the road.
Even inexpensive models like the Zoom TAC-2 are highly recommended. The Thunderbolt interface brings it to just 2 ms latency.