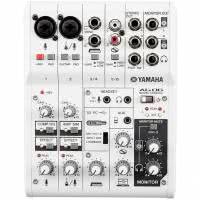 A mini mixer is extremely compact in design and yet allows for a wide range of applications. Beginners, advanced and professional sound engineers like to use these little all-rounders again and again.

In everyday studio life or at home, a mini mixer serves as the central interface between different signal sources. Various playback devices can be connected and clearly arranged for playback.

Diverse applications for every purpose

A digital interface in the form of a USB interface is often built in to make the device suitable for a recording session. If you are especially interested in multitrack recordings, you should better have a look at the category "Audio Interfaces". These devices are especially designed for recording and playback and offer more possibilities for this area.

In live operation, the smaller mixers allow FOH and monitor mixing, especially for smaller band projects. Depending on your project, you should especially check the number of aux ways needed. If a band expands later, a second mixer can be connected in parallel without having to think about a system change immediately.

The sound of the little helpers no longer has to hide from the higher priced models. The manufacturers often integrate similar or identical converters of the flagships. This favours a clean and low-noise sound even with lower input signals. Nevertheless, you should always control your levels optimally.

So you don't have to set your budget for a compact mixer as high as you did a few years ago.

Your demands on the situation determine the requirements for the mixing console.
To make it easier for you to make a shortlist, you should prepare a list of required channels, playout paths, equalizers and more. As a rule, each input source should be assigned to a separate channel.

Mono and stereo channels, balanced microphone connections or separate phantom power for each channel strip should also be taken into account.

The equalizer often offers only fixed frequencies, which leads to less adjustment possibilities. Often, however, semi-parametric equalizers are used in the mid-range frequencies to allow for more precise vocal adjustments.

A mixer consists of individual channels, subgroups and a master section.
For medium-sized productions it makes sense to work with subgroups. This has a positive effect on the speed and flexibility of routing. This way you can control your three singers louder or softer with only one fader.

Depending on the purpose, it is therefore advantageous to add the subgroups to your requirement list.

Additional features with plenty of leeway

In addition to the usual, some manufacturers install digital effect devices such as delay, reverb, flanger or chorus directly in the console. The purchase of additional hardware and cabling is not necessary.

However, the internal effects are often designed for studio applications only and can usually only be mixed in after recording. If you are unsure about the routing and signal flow of various functions, you should check again to be on the safe side.
For live use, additional insert or playout channels are offered and a compressor per channel is often part of the equipment.

In order to be able to react to the ambient sound at an event, frequency-related adjustments of the overall mix are necessary. This is preferably done via a master EQ, which is supplied with various devices.